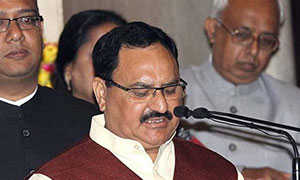 The government on Friday launched a new policy for HIV under which anyone who is tested and found positive will get the necessary treatment.

HIV destroys the CD4 T cells in the body that strengthen immunity. People with HIV, who have a CD4 cell count below 200, are at significant risk of developing serious illnesses, and the government currently provides free treatment to people with a count of 400 and below.

As per the new policy, “As soon as a person is tested and found to be positive, he will be provided with ART (antiretroviral therapy) irrespective of his CD count or clinical stage,” Union health minister JP Nadda said.

“This will be for all men, women, adolescents and children who have been diagnosed as a HIV+ case. This will improve longevity, improve quality of life of those infected and will save them from many opportunistic infections, especially TB,” he said.

The government is also working on developing a National Strategic Plan for HIV for the next seven years that will be crucial for ending AIDS.

Nadda stressed on the importance of ending stigma to enable persons infected and affected with HIV access health services.

To facilitate this, “the long-pending HIV/AIDS Act has been passed recently”, he said, noting that this was a historical step. “Very few countries globally have such a law to protect rights of people infected with HIV.”

The key provisions of the Act are prohibition of discrimination, informed consent, non-disclosure of HIV status, anti-retroviral therapy and opportunistic infection management, protection of property of affected children, safe working environment and appointment of ombudsman in every state.

Out of 21 lakh people estimated having HIV, only about 14 lakh have been identified yet. To detect the remaining, the government has revised national HIV testing guidelines and are aiming to reach out to people in communities and test them where they are, of course with proper counselling and consent.

There are about 1,600 ART and Link ART sites across the country where treatment is provided. Recently these sites crossed the 1 million people mark, making India the second country in the world to have such large numbers on free lifelong treatment.

“We have been able to avert 1.5 lakh deaths due to ART and we will be able to avert 4.5 lakh more deaths by expanding provision of ART,” Nadda said.

Steve Kraus, director of UNAIDS, regional support team for Asia-Pacific, praised the boldness and the commitment of the government in treating people with HIV.

“This new policy will bring life-saving treatment within reach of all people living with HIV. It will keep individuals, families and communities healthy and productive and ensure India ends the AIDS epidemic by 2030.”