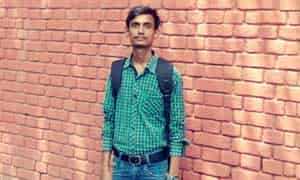 24-year-old Abhishek contacted HIV through a blood transfusion when he was being treated in the hospital for low blood platelet count due to chikungunya fever. He lives with his parents and a younger sister in Rohtak, Haryana.

At first, it was tough on him and his family. With time, they shifted their focus on treatment and helping Abhishek live a healthy and normal life.

Abhishek had applied in Chandigarh University for his bachelor’s education but failing to pay the remaining amount of the fees, he couldn’t secure admission. In addition, he also lost the amount, approximately 1.5 lac that he had paid as an advance. It was a substantial amount and a big loss for the family. Abhishek’s parents didn’t have any more savings to try elsewhere. Abhishek saw his dream of going to college slipping away from him.

He knew education is key to better opportunities and brighter future. He was determined to go to college. In desperation, he started asking for help. He wrote a heartfelt message through End AIDS India Campaign’s Facebook page. The team forwarded his request to the programme team. And within no time, we were able to establish a connection between our Care & Support Centre team in Rohtak and Abhishek. They visited Abhishek and understood his situation.

With the advocacy of our field team, Chandigarh University, in a rare move, agreed to refund hundred percent of the fees Abhishek had paid as an advance. Our team then approached Punjab University for admission and possible concession of fees as person living with HIV. After few meetings and follow ups, Abhishek got admission in Punjab University and also got the concession in fees. He is all set to study mass communication course and is thrilled that his dream of going to college has finally come true.